Cannabis Legalization and Stopping the Spread of Unwanted Smoke 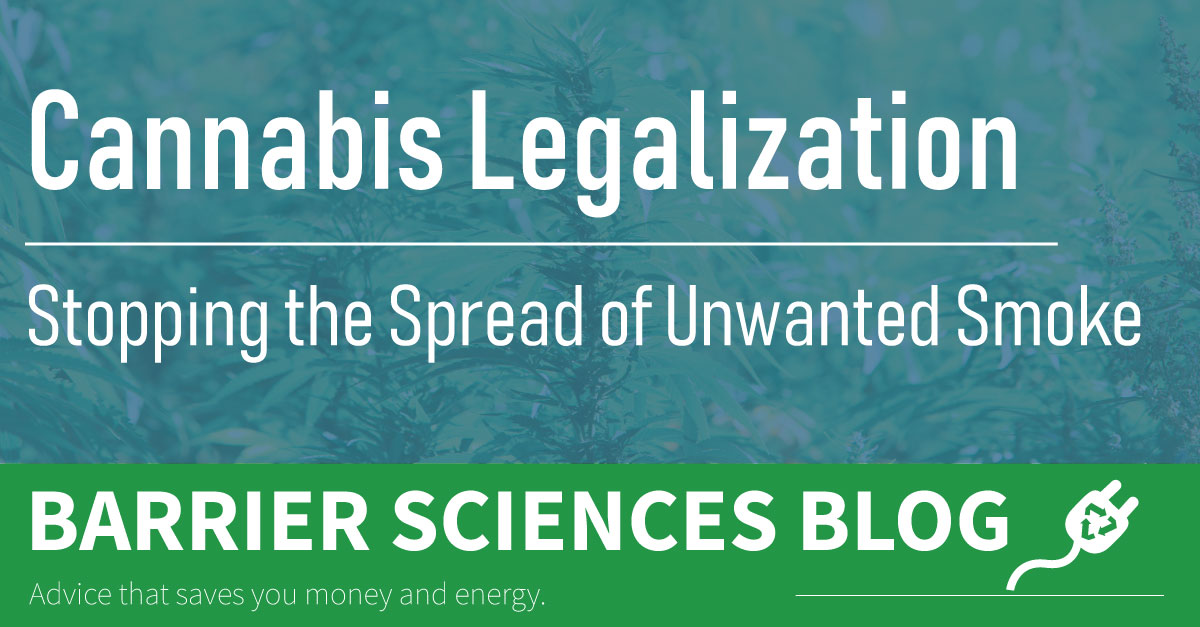 With the upcoming legalization of cannabis on October 17th, Canadians are free to smoke recreationally on their own property. Cannabis smoke is known to have a strong skunky odour, and can pose an air quality concern inside poorly compartmentalized homes that neighbour recreational smokers. As a property manager, concerns raised by tenants regarding air quality and/or intrusive Marijuana smoke are not something to be taken lightly. Those with asthma, allergies, or prior respiratory issues may have a stronger negative reaction to unwanted smoke - causing them to seek immediate action to resolve the issue.

How Does Smoke Get in?

Smoke is pervasive and can find its way through any number of improperly or unsealed holes within a building. Common places for this to happen include: doors, uninsulated electrical sockets, air vents, and windows. Looking to reduce intrusive cannabis smoke is something we recommend for property managers to start considering before legalization happens. That way tenants will have reassurance that something is being done to increase the air quality and comfort within their rented property.

What Can Be Done to Reduce the Spread of Smoke?

Through energy auditing services like those offered by BSG, an airtightness test can be conducted to locate and identify the areas where smoke can find its way in. In places where smoke can invade, air is also being exchanged - meaning a less comfortable and inefficient home. This also means that any work that is done to improve the quality of air in a home will also improve comfort and energy efficiency.

After conducting an airtightness test and locating all the air leakage areas where smoke can invade, the next step is to start working on compartmentalizing the home.

What is Compartmentalizing and How Can it Help?

Compartmentalizing is the term used to refer to air sealing a home. Whether that is done by work such as the proper installation of insulation, or by sealing leaky areas with caulking, compartmentalizing can be an effective way to reduce the spread of cannabis smoke - both for hiding it, and for hiding from it.

Proper air sealing can easily be seen as a wise investment to make in a managed property. Not only does increasing a home’s energy efficiency lower its operating cost, but it also improves the comfort and thereby satisfaction of the tenants. Compartmentalizing is extremely effective at separating the inside air from any neighbourhood cannabis smoke in both large and small buildings. It is possible to compartmentalize individual rooms/units to help meet the needs of each tenant individually. And as such it is possible to have cannabis sensitive and/or allergic persons, and those with respiratory issues, to remain feeling comfortable and safe while inside their rented property.

Keep in mind that compartmentalizing might only be one suggested action based on the initial airtightness test. Other factors that are considered are the HVAC and mechanical systems. To procure a list of suggested solutions for you building, call 1-866-333-3920.