Condo Boards and the Rush to Legalization 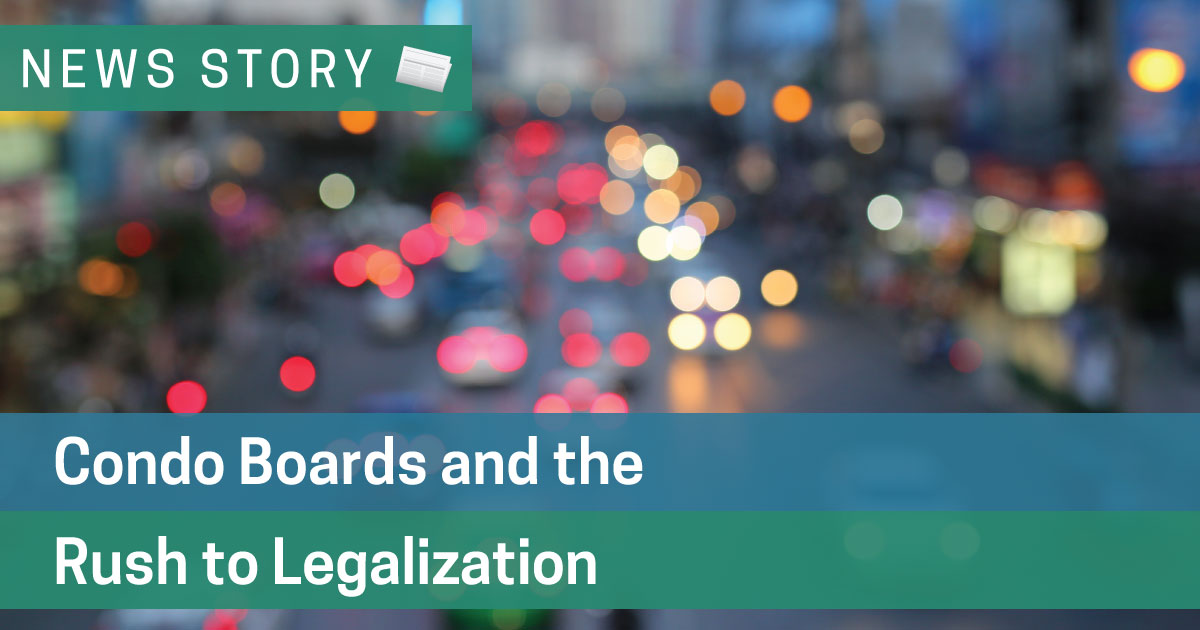 Lawyer Robert Noce, a partner of Miller Thomson LLP in Edmonton, is advising Canadian condo boards to quickly establish rules that prevent the smoking or cultivation of pot within the building, before legalization happens on the 17th. He stated that the most common troubles involving cannabis in condominiums involves the smell of smoke and potential mould from home cultivation, and that a majority of condo boards have already begun amending their bylaws in preparation for the legalization of recreational marijuana.

Tony Gioventu, executive director of the Condominium Home Owners’ Association of British Columbia, adds how this may be easier to accomplish in B.C. given that smoking cigarettes is banned in nearly every condominium already.

“B.C. is quite far ahead with lifestyle bylaws,” Gioventu said.

He also says that the vast majority of condo boards will adopt bylaws to prevent their tenants from smoking or growing cannabis within their unit.

As each province decides its own individual laws and regulations for the consumption and cultivation of cannabis, there will also be some variation in the rules and regulations that will come from municipalities and condo boards as well.

In Alberta, municipalities decide laws on consumption, while the cultivation of cannabis is restricted to four plants province wide - unless restrictions are placed by landlords that declare otherwise.

Much of Atlantic Canada, including: Newfoundland and Labrador, Nova Scotia, and New Brunswick, along with Manitoba, Saskatchewan, Yukon, and the Northwest Territories are allowing cannabis to be smoked on private property and private residences, but are permitting landlords to restrict cultivation and consumption.

Prince Edward Island has restricted cannabis use to within private homes only, and Quebec will be allowing pot to be smoked wherever cigarettes are able to be smoked.

Lawyer Rodrigue Escayola, a partner at Gowling WLG in Ottawa, has stated that the majority of Ontario condo owners want their respective boards to regulate cannabis use and growth.

“They want some certainty and they want to know that they will be protected against nuisance,” he said.

Escayola also stated that condos are generally moving towards an entirely smoke-free environment, with the upcoming legalization accelerating the process. However, he believes it is a challenge for homeowner groups to balance property rights with the greater common good, as the idea that “a person’s home is their castle,” and that within their castle they can do as they please, is, “a very strongly rooted principle in law,” Escayola said.

Elaborating on why growing Marijuana plants may require stricter rules than growing something such as tomatoes, Escayola says that they require a lot more water, heat, and light, which comes from the building’s shared utilities.

He also adds that there needs to be reasonable accommodations for tenants who use medical cannabis, and that they should explain to their condo boards why they need to smoke inside their units instead of using one of the smoke-free alternatives for consuming marijuana.

Escayola believes that condo boards are better to establish rules sooner rather than later, as waiting longer may entail more accommodations that they are likely to have to make.