New High-Rises Are Not Energy Efficient: BC Hydro Report 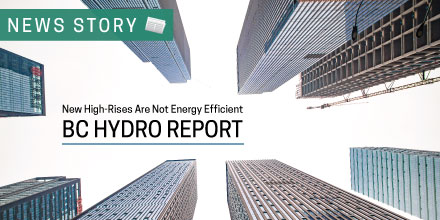 A recent report from BC Hydro found that freshly built high rise buildings consume even more energy than the high rises that were built in the 1980’s.

The report found that newer high rises actually consumed as much as double the amount of electricity compared to their older counterparts, and that their high rate of consumption was equally split between energy consumption from tenants, and energy consumption used to keep the building running at its normal capacity.

From 1999 to 2009, energy consumption in high rise buildings rose by the largest amount, with a 65 percent increase in the average building’s energy usage.

Tanya Fish, spokesperson for BC Hydro, has said that many condo dwellers are not aware of how much energy they are actually consuming, because there is a disconnect between their energy usage and the energy bills they pay - since much of it is covered by their condo costs.

The report listed the luxury amenities that are included with many condos as a contributing factor towards higher levels of energy consumption, such as: hot tubs, pools, exercise centres, and saunas.

It also noted that condo’s have many lights and appliances running all day long, such as hallway and lobby lights, elevators, and others, which further drive up energy consumption amounts.

However, Michael Geller, an architect in Vancouver, has said that modern amenities are actually not the major contributor towards the higher rate of energy consumption found in newer condos; saying instead that the building materials that are commonly used to make them (glass and concrete) are terrible insulators and have poor energy performance.

What this means for Geller, is that building standards are largely to blame for the higher levels of energy consumption found in newer condos.

An Energy Audit Finds the Most Cost-Effective Upgrades

Taking steps towards improving your home’s level of energy efficiency can seem a bit intimidating at first, but it is actually a simple, affordable, and effective way of improving your home in number of different ways. By upgrading your home in terms of energy efficiency, you may notice that it not only becomes cheaper to operate, but also that it is more comfortable, has better air quality, and that it even has a better value on the housing market when it comes time to sell.

With an Energy Audit (aka an Energy Assessment) from BSG, you can see exactly how your home is performing in terms of energy efficiency, and which areas could be most the cost-effectively improved. In other words, our Registered Energy Advisors will analyze all of the data they gather during your assessment, and provide you with a list of possible upgrades that have been ranked in terms of their benefits per dollar of your investment.This allows you to make a clear and informed decision that is based on an in-depth analysis of your home.

Additionally, an Energy Audit can also help you qualify for up to $5,000 of home reno rebates from either Union Gas, or Enbridge Gas (depending on your provider), making it even easier for you to see a return on your investment.

If you have any questions about energy audits, home reno rebates, or how to go about improving your home’s energy efficiency and utility costs, please contact us through our free phone consultation service.

The New Home Efficiency Rebate offers rebates up to $5,000.

There’s great news for homeowners who are planning to do residential renovations or upgrades! The new Home Efficiency Rebate offers up to $5,000 back for home energy upgrades. By doing renovations or upgrades that will improve a home’s energy efficiency, homeowners may be eligible for substantial rebates of up to $5,000 from Enbridge and Union Gas. Simply put, there are long-term payoffs with an energy efficient home.