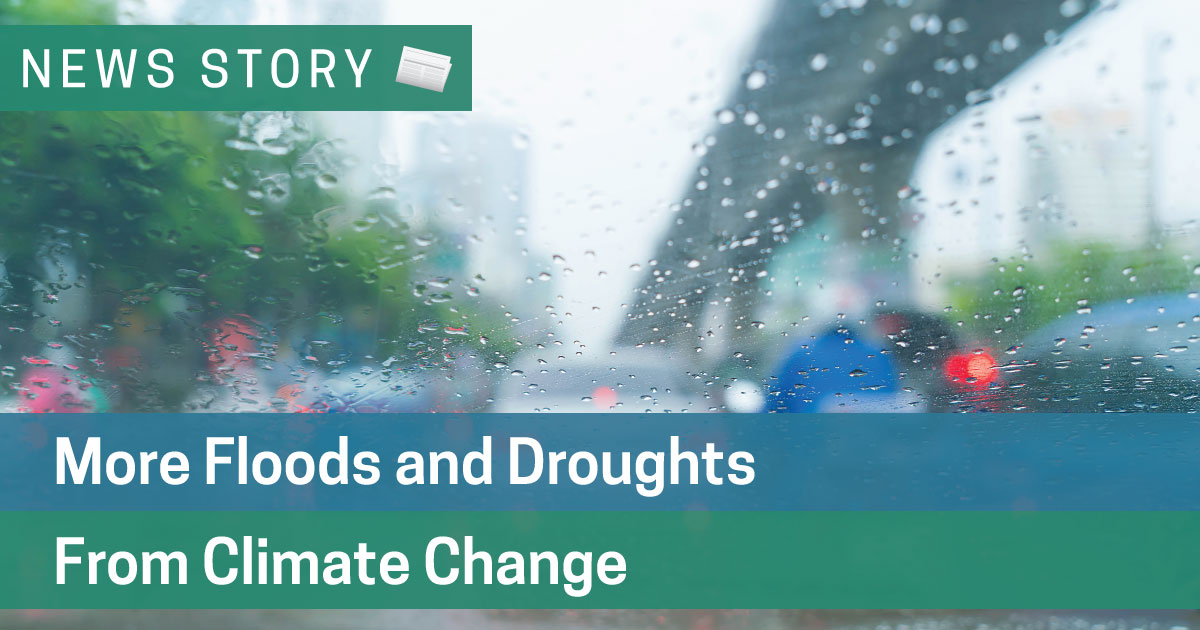 A recent study from the Potsdam Institute for Climate Impact Research was published in the academic journal, Geophysical Research Letters, and stated that climate change is responsible for an increase in both floods caused from heavy rainfall and drought events across many regions of the globe.

In the Central and Eastern United States, along with Northern Europe and Northern Asia, the study indicates that climate change has directly increased the amount of severe rainfall events and flooding in these regions - with the Eastern United States seeing a 25 percent increase in the number of months with record-high rainfall between 1980 and 2013.

Jascha Lehmann, lead author of the study, used an analogy of a six sided die to explain how common it is for extreme weather events to happen - an average of one out of six times.

“By injecting huge amounts of greenhouse gases into the atmosphere, humankind has loaded the dice. In many regions, we throw sixes much more often with severe impacts for society and the environment,” said Lehmann.

An example of this can be seen in many parts of Africa, as the study indicates that a third of the record-high dry months that are recorded in different parts of Africa would never have happened without climate change - making it more difficult to maintain agriculture and obtain drinking water in these regions.

The global reinsurance company, Munich Re, says that the 2018 hurricane season totaled $51 billion USD in global losses, which is a much more substantial amount than the $34 billion USD that's usually lost in the long-term annual average.

The study was conducted by searching the Global Precipitation Climatology Centre databases, and using the information to determine how many drought and heavy rainfall events would have naturally occurred if global warming had not have interfered - thereby showing how many extreme weather events were caused as a result of climate change.

As a homeowner, you may be concerned with the increasing amount of heavy rainfall, drought, and severe weather events that are occurring globally due to the influence of climate change. But by taking the proper precautions and preparing your home accordingly, you can become more disposed to handle the increase in harsh weather and severe rainfall events that may happen in Ontario.

To protect your home, a Home Energy Assessment can be conducted by one of BSG’s Registered Energy Advisors, allowing you to be made aware of your home’s vulnerabilities and how they can most effectively be managed. Air leaks can be identified so that they may be properly sealed by either you or a professional insulation installer, which creates a more secure and weather resistant building envelope.

Water management systems can also be installed to help conserve water during long dry seasons, and having a home that takes part in a stormwater harvesting system can help reduce the impact of floods in a region.

By taking measures such as improved air sealing or conserving water, you will also find that your home can become more energy efficient, allowing you to not only become more prepared for harsh weather, but also helping you cut back on energy consumption and utility bills, as well as working to make your home more comfortable and environmentally friendly in the process.