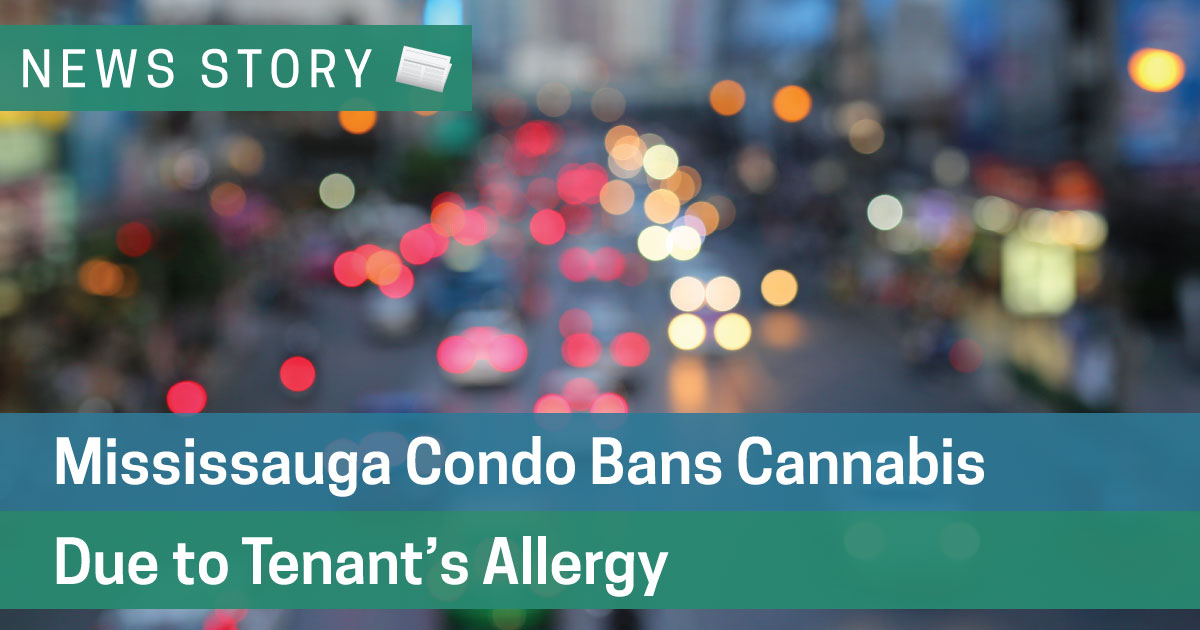 Applewood Place, a condo board in Mississauga, has banned the smoking and cultivation of cannabis within the building’s units and common spacesafter it came to the board’s attention that one resident, Adele Schroder, had a potentially lethal allergy to it. This came after an attempt to pass a rule in April to ban marijuana in the building, but owners had voted it down.

Schroder’s allergy had her taking measures such as: putting towels under her door, carrying an EpiPen with her at all times, and having two air purifiers run in her unit in an effort to avoid any exposure to cannabis smoke or odours.

As there are also a number of medical marijuana users in the Applewood Place condominiums, an issue of competing human rights was posed.

In the letter that was given to residents of the Applewood Place condominiums banning the smoking of cannabis within units and common spaces, it was deemed that as “the result of a unique medical condition of one of our unit owners,” cannabis odour is an “unreasonable nuisance” and that it creates a “hazardous condition” under the Condominium Act.

This decision did include an exception for tenants who use marijuana medically, with the letter declaring it would, “balance the competing accommodation needs of potentially multiple individuals,” and that those tenants should inform the board.

Denise Lash, lawyer representing Schroder, has said that the case has set a precedent, due to the fact that “it’s outside the rules of procedure. The corporation has a complete ban” despite the fact that there was, “no specific rule that prevented it,” she said.

Lash has also noted that the only way the owners can refute this decision is by taking the condo board to court - a case that she believes they would not likely win.

Marc Bhalla, a condo mediator in Toronto, expects there to be more unique situations like this, once marijuana becomes legalized on the 17th of October. He has praised the condo board for the way they handled the situation, and promotes the idea that an attitude of working together finds better and more creatives solutions.

For condo boards who are currently looking to prohibit the smoking or growing of cannabis within their building, or those that have cannabis sensitive tenants and are looking for a reasonable solution for their health and safety, while also balancing users of medicinal marijuana, we recommend them to consider conducting an air tightness testof affected units, and to follow the recommendations that are supplied in the report. This may include an air tight compartmentalizing of affected units or common areas, aiding to prevent the intrusion of unwanted cannabis smoke or odour.